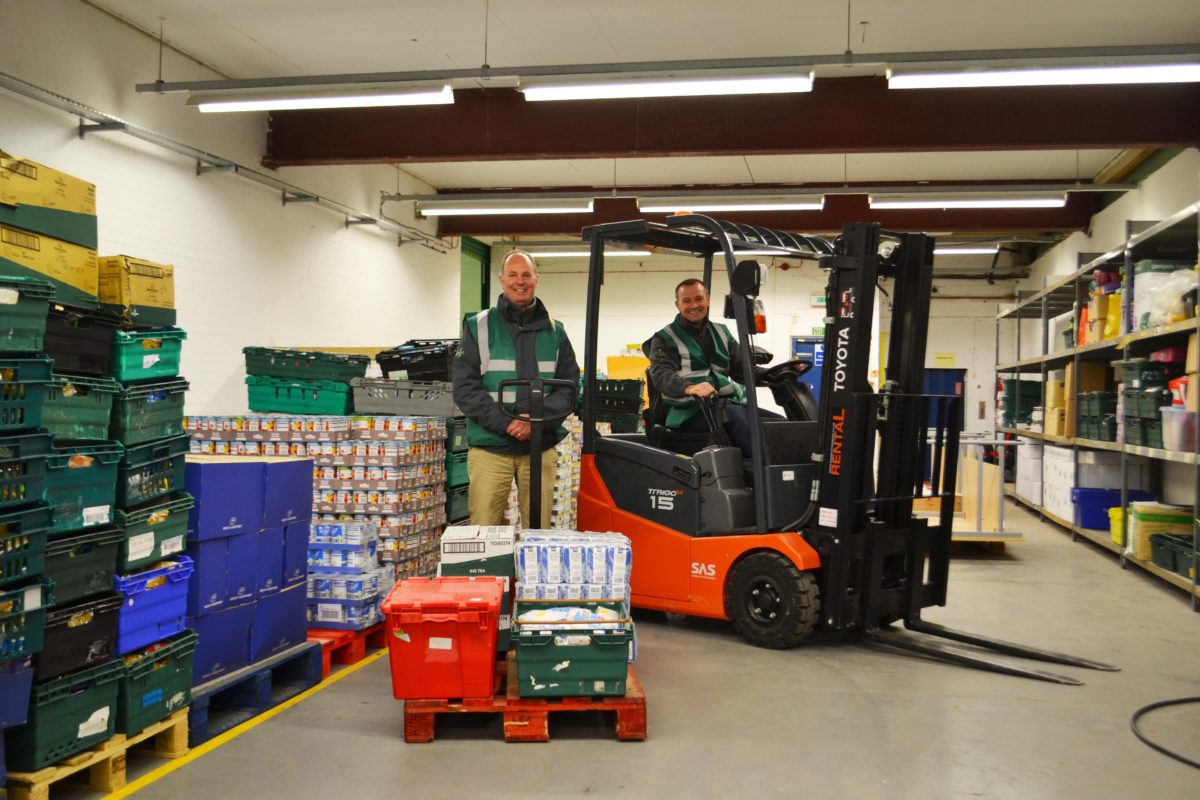 Cold Chain Federation member Toyota Material Handling is helping vulnerable people in the East Midlands by donating a counterbalance forklift and two hand pallet trucks completely free-of-charge to the Leicester South foodbank. Toyota will also maintain and service the trucks at no cost and is providing driver training lessons to volunteer staff at the foodbank to ensure that the organisation derives maximum benefit from its new equipment.

In addition, a group of colleagues from Toyota’s Leicester branch will regularly give up their time to help at the foodbank where they will prepare, pack and distribute food parcels to the local community.

Toyota will also present the foodbank with some much-needed office furniture and has arranged to boost stocks of the cardboard packing boxes that the foodbank uses to make up its parcels and keep produce fresh and damage-free during transit.

Part of the Trussell Trust network of foodbanks, the Leicester South facility has seen the number of people using its services increase by a staggering 351 per cent since March 2020.

“More people are finding themselves unemployed and unable to afford sufficient food for themselves and their families so they are turning to us to help in ever greater numbers,” says Bruce Harrison, general manager of the Leicester South operation.

“Every day people in the UK go hungry for reasons ranging from redundancy to receiving an unexpected bill on a low income. A simple box of food makes a big difference,” he adds.

Local supermarkets and wholesalers regularly donate the essential goods that the foodbank redistributes and, prior to the arrival of the new Toyota forklift, volunteers at the Leicester South unit had little option but to unpack delivery vehicles by hand and physically carry the incoming products to the facility’s storage area. This was both time consuming and tiring work.

Bruce Harrison comments: “The introduction of the Toyota forklift and the Toyota hand pallet trucks means that we can now unload a vehicle in about a third of the time that it was taking to do the job manually. It also allows the volunteers that were previously required to help with the unloading process to focus on other tasks such as sorting and packing food parcels, which ensures that we are able to make optimum use of our volunteers’ time.”

The counterbalance forklift supplied by Toyota is a Traigo 48, 4-wheel electric-powered model. Compact and reliable, the Traigo 48 can operate both indoors and outdoors on uneven surfaces and is the ideal truck for intense operations where speed and high levels of stability are required.

Toyota’s relationship with Leicester South foodbank developed out of a chance discussion between Anthony Widdowson, Toyota’s National Warehouse Manager who is based at Toyota Material Handling’s Leicester depot, and an acquaintance who volunteers at the facility.

Anthony Widdowson comments: “My friend and I were chatting and he mentioned that the foodbank needed a forklift truck. I discussed the situation with my  Toyota colleagues and it was quickly decided that we wanted to help and would supply and maintain the truck free-of-charge.

“Of course, it is sad that there is a need for foodbanks but the reality is that they play a vital role in today’s society and Toyota wants to do all that it can to help operations like the Leicester South facility and the local communities that they serve.”

Supporting projects such as Leicester South foodbank is a cornerstone of Toyota Material Handling’s corporate sustainability strategy. Indeed, as part of its ongoing commitment to seek out new sustainable initiatives, the company recently established a sustainability group to identify ways that Toyota can contribute more to society and, in particular, the local communities where its offices, production sites and regional depots are based.

Anthony Widdowson adds: “A sustainable company engages in business practices that are good for people and Toyota’s approach to sustainability aims to make a difference to the wellbeing of those who maybe less fortunate than others across the country.”

Leicester South foodbank’s Bruce Harrison, concludes: “We are very grateful to Toyota for everything they are doing to support our work. Having a forklift allows us to operate more efficiently and, ultimately, enables us to feed more families in need.” To learn more about the Toyota range of electric forklifts visit https://toyota-forklifts.co.uk/make-the-shift/