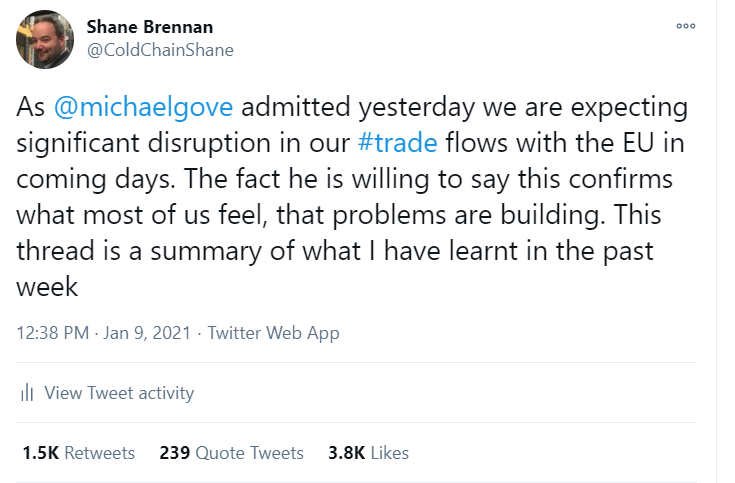 About 12 years ago, my friend and PR consultant Michael Saxton, urged me to look at this new platform called Twitter. He told me it was an important innovative platform that I should start using to get the word out for my then employers.

I logged in played with it for a while and concluded it was all too much effort and was never going to take off. LESSON do not ask me for stock tips.

Saturday morning I wrote a Twitter thread about reflections on Week 1 Brexit – this morning I see that it has been read 1 million times. I am conscious that many members and cold chain people won’t see it on Twitter so I am reposting here.

As @michaelgove admitted yesterday we are expecting significant disruption in our #trade flows with the EU in coming days. The fact he is willing to say this confirms what most of us feel, that problems are building. This thread is a summary of what I have learnt in the past week

DISCLAIMER I run a trade body and spent the week in my back bedroom on the phone to members, reading the media and on zoom calls. I’m not on the ground and I am not in the operation rooms. So my info is second hand and partial. No one has a complete view. IT IS HIDEOUSLY COMPLEX

The first obvious problem is the number of different actors involved. On the commercial side – within 1 exporter there are multiple depts. There is also the buying company and the logistics company. They all have to sync. 1 load of goods involves multiple commercial actors.

On the government side its even more complex. In UK there are dozens of departments and agencies involved, and the same if not more in every member state of the EU. there are hundreds of thousands of decision makers involved.

They all have the same rule book though – YES true but its 1200 pages long and it’s 15 days old – also – here’s the thing with red tape, it’s open to interpretation. (It’s why lawyers tend to drive nice cars) and so being BORDER READY means different things to different actors.

Millions of people, working to the policies and objectives of thousands of organisations, learning how to meet and enforce rules for the first time.Also when it comes to border paperwork – it is not one piece of paper or process it can be dozens.

One major thing from this week is seeing in practice the reality we knew in theory, that the border isn’t one physical place.

2/ customs agents are a ‘border’ – not enough and overworked

3/ vets are now a ‘border’ having to complete complex paperwork

Everyone has either got a new job, or one that is exponentially bigger than it was last week – each one can stop or slow goods

The reality of this week is that people have done their best and have learnt a lot, but in many cases they haven’t got it 100% and that will have been masked because ‘non-compliant’ loads has been waved through with a warning (did the warning get back to the right people?)

As the pressure mounts, the ‘get through the news cycle’ approach of UK ministers will be to play things down, (see the first 12 hours of the covid French border crisis – 172 lorries 😡) and if and when that is not possible the shift will be to blame non-ready traders

They will be right to this extent – a business choosing to sell into a foreign market must meet the rules of the market they want to sell to. UK Gov can advise, but as has been proven many times recently there is a point where gov admits that the trader is on their own.I admit to have made a mistake myself. I have spent endless hours debating and finetuning government advice and policy approaches with UK authorities. I have gone through the Border Operating Model (BOM) with a fine tooth comb….but

…the reality is that the UK BOM – comprehensive, daunting and complex read that it is – is essentially the UK Government’s hope of how things will work.My briefing to members yesterday relied on documents like this https://revenue.ie/en/customs-traders-and-agents/documents/customs-advice-for-drivers-using-dublin-port.pdf

…and this from French authorities https://www.brexit.gouv.fr/files/live/sites/brexit/files/contributed/Documents/SPS%20Controls%20for%20goods%20imported%20from%20the%20UK%20to%20the%20UE%20via%20France.pdf

…For trade bodies like ours our focus has to shift fast to a practical dialogue with the EU authorities on the ground. We have to (1) understand what they want, (2) where possible persuade them on interpretation changes and (3) help members do what they want.Hopefully that will be enough and we will get through the next fortnight.

However if not we are going to have to essentially plead for more unilateral action by EU authorities to extend informal ‘grace periods’. like this one from Irish Customs https://www.irishtimes.com/business/economy/post-brexit-customs-eased-temporarily-for-businesses-importing-from-britain-1.4453074 …

Again I know they don’t have to – I know it’s the law – and I know it was the UKs choice to leave. But this type of time limited, grace period on the enforcement of the rules will lead to better compliance and better outcomes for EU business too. Grey areas present all the time

Over the next few weeks we will see the birthpangs of our new trading reality. Boris Johnson is fond of the Australia model of trade. A core part of that is a business culture focused on opening up markets it requires responsiveness, persuasion, empathy and humility

The negative political relationship we inherit from the negotiations, goes deep into the regulatory and commercial links between UK and EU. It’s not going to be easy and our ministers can probably do more harm than good right now.

So in coming days, as the blame game kicks in, we will have to work hard not to rise to the bait. A row with UK Ministers won’t move a single lorry.Our overriding question from here – what does the EU require and how do we make it happen?That’s what control looks like.