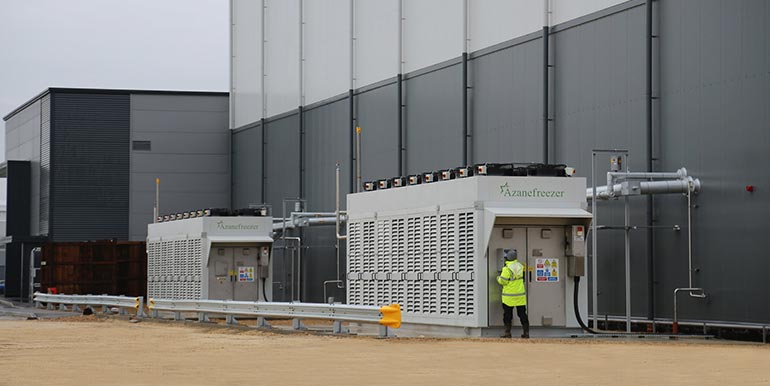 The book profiles the company’s key innovations and the story behind each invention. From the birth of the first four-way valve, to the first refrigeration system which allowed “free cooling”-(the Thermosyphon) through to the first use of carbon dioxide in a freeze drying application and delivering the world’s first and largest zero carbon 90°C Ammonia District Heat Pump, Star Refrigeration has consistently pioneered exciting new technologies for its customers.

Dr Pearson, said, “The past 50 years has seen Star Refrigeration face and overcome a multitude of challenges in its drive to deliver outstanding service to our customers and reduce environmental impact. Our success is based upon the unwavering commitment of our employees as we continue to work towards a better future”.

“Star Refrigeration has been a pioneer throughout its history, pushing the boundaries of refrigeration and heating engineering technology. I hope that the untold story of our first fifty years will capture the imagination of our stakeholders and get them excited for the future”

In 1970, three engineers – Dr Stephen Forbes Pearson, Anthony Brown, and Robert Campbell, pulled their redundancy money together and set up Star, recruiting skilled engineers and operating from Dr Pearson’s home. Fast forward five decades, and the company now employs more than 300 staff across 10 locations in the UK, together with a number of agents and subsidiaries around the world.

A true testament to Star’s investment in its employees, many of the engineers from the ‘early days’ remained with Star until retirement, and some are still in active duty today. Rory Gordon of Star’s Manchester branch has worked for the company for 36 years, and recalled standing in the Kelvin Hall Glasgow in 1985 as he looked around at food and drink debris. In just 11 days, an ice rink would be in the very place they were standing as the venue prepared to host the Air Canada Silver Broom World Curling Championship. Having worked 12-hour shifts, made manageable by a steady stream of bacon sandwiches, tea and coffee, Rory considered whether he would put his hand up again for a similar job. “Of course I would!”, he said.

The company’s commitment to its staff is clear in its strategic aim of ‘Developing Young People’, which has become more prevalent than ever in 2020. Through its Apprenticeship Scheme, Star offers young people across the country the opportunity to learn and develop, equipping them with the skills and confidence to face future challenges and become the leaders of tomorrow. Award winning apprentices Gavin Kidd, Sam Gills, Tom Woolston, Chris Druce, and Lyle Perks are just some of the latest beneficiaries of this commitment to supporting the next generation of engineers and specialists. Star Refrigeration has long been a leader in the advancement of refrigeration technology and natural refrigerants, including low charge ammonia and carbon dioxide. But perhaps the most important factor in the company’s success is its focus on the needs of the customer and the wider industry.

In recent months, Star’s commitment to the safety and well-being of its staff and customers during the Covid-19 pandemic has been its first priority. The company has been able to continue the manufacturing and installation of equipment in order to support essential industries and supply chains during lockdown, whilst protecting personnel and minimising risk.

Finally, Star continues to innovate in all areas of the cooling industry. This year the company played a key part in helping Britain’s Curling team train for the Winter Olympics in PyeongChang by delivering ‘world-class ice’- similar to what would be expected at the games- for the National Curling Academy’s in Stirling.

Dr Pearson said, “Innovation is part of our DNA. Through working in partnership with our customers, Star have continued to deliver innovative cooling and heating solutions to the industry, which has helped to reduce its carbon footprint and bring us closer to achieving the nation’s net zero carbon emission goals.”

Star is looking forward to the next fifty years of delivering cutting edge cooling to both leisure and essential industries, helping the industry as a whole to move towards ‘Net Zero’ carbon emissions by 2050, and continuing its renowned levels of service for all of its highly valued customers.