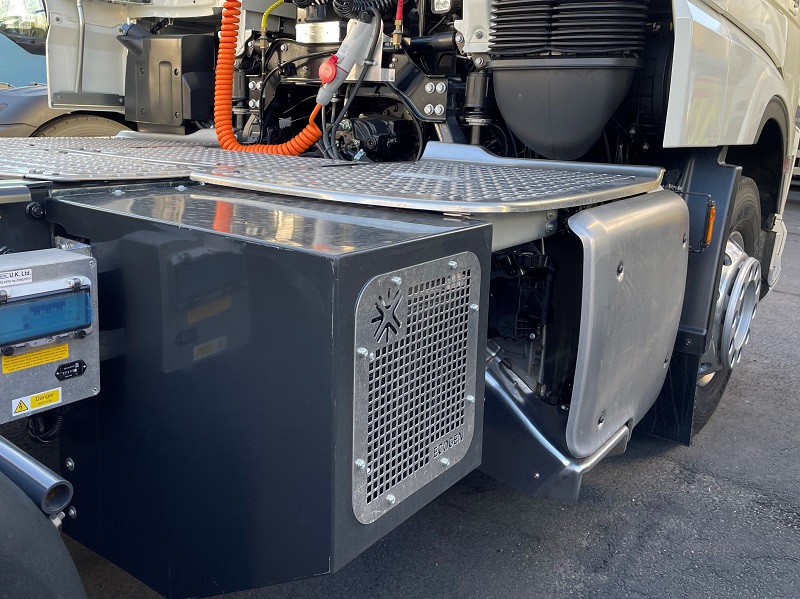 McLaughlan Transport, one of Scotland’s best known and long-established hauliers has fitted the first of three Cold Chain Federation member Hultsteins Ecogen systems to one of three new DAF 105 XF tractors which, says the company is expected to make significant cuts in fuel consumption while extending the working life of their existing diesel fridges and greatly reducing harmful emissions.

“We ordered the new units with a factory-fitted PTO (power take off) so the Ecogen system could be put to work straight away.” Says Managing Director, George McLaughlan. “We are the first in Scotland to benefit from Hultsteins’ onboard generators and with the use of gas oil for diesel-powered refrigeration units stopping on 1st April, the price of fuel is going to rocket. Plus, with carbon emissions now high on the environmental list of concerns, it seems like the best thing to do.”

Plus, adds George, he expects Ecogen to power his diesel fridges for at least 10 years and over that time, maintenance, fuel and vehicle downtime will all be greatly decreased. Plus, although he may see a very slight increase in fuel consumption from the tractors, he also anticipates that the harmful emissions from the diesel refrigeration unit will be virtually eliminated.

“Whichever way you look at it, we will definitely be cutting running costs, because the diesel fridge engines will no longer be required when the Ecogens are running.”

Hultsteins, based in Sweden, has been designing and producing hydraulic and electric-drive transport refrigeration systems for nearly 60 years and as the environmentally damaging effects of diesel consumption are now widely visible, retailers and transport operators are turning to the Ecogen hybrid system to validate their respective environmental objectives.

“The system generates a constant 400-volt, 3-phase electrical power to the same standard as the mains supply” adds George, “which transforms the existing diesel TRU into a hybrid solution that can run any marque of diesel fridge and fit to any tractor with a PTO.”

“This is where the Ecogen system will really benefit our customers.” Explains George. “Normally, the fridge systems on these ISO containers require an electric plug-in and of course when they are on the road, unless the trailer has an on-board genset, the load will not remain temperature controlled. With Ecogen however, Hultsteins have provided a special converter so the suzi can simply plug straight in and keep driving the fridge. Currently, we are the only transporter who can provide this facility.”

Hultsteins support partner in Scotland, Glasgow-based refrigeration service provider Transcool Scotland Ltd, fitted the Ecogen system and from their 5000 sq. ft., fully equipped workshops will provide ongoing service for McLaughlan and all other operators of Hultsteins equipment in Scotland and the border regions of England.

Hultsteins parts meanwhile, can be ordered from the company’s parts partner, Myriad Parts, who provide a fast response delivery service throughout the UK.

Hultsteins’ electric generation and hydraulic refrigeration systems are widely used throughout Europe since the 1960s and in recent times are becoming increasingly popular in the UK. Hultsteins’ Managing Director for the UK and Ireland, Graham Usher is upbeat regarding the simplicity to fit and fast pay-back of the system:  “With this typical application, McLaughlan Transport and all temp-controlled trailer operators can expect to extend the life of existing fridge units and cut costs, while seeing a return on investment in as little as 18 months. And what’s more, if the truck comes with its PTO already fitted, we can install a new Ecogen in around 8 hours.”